Singapore And My SLR

The lack of good photos from my brother’s wedding made me determined to get back into my photography as soon as possible. Singapore is a vibrant city full of shops but I read that the botanical gardens were worth visiting so I decided to take Zack and my SLR for a day out. The metro was cheap and took me straight to the gardens which turned out to be extensive. Straight away I saw some decent shots and with some trepidation I took out my camera. The day was as humid as before and the lens fogged up but once it cleared I was able to capture the vine arches and even get a shot of Zack to start me off. I was just starting to get into the day when my battery died. This isn’t a problem as I always carry a spare except I couldn’t find it! The whole purpose of the day was to practice my photography with my SPR and all of a sudden it was nothing but dead weight.

I was really annoyed at myself for not checking that the spare was where it usually was. I soon rallied and decided to get some lunch and asses my options. Lunch revitalised me and I decided to walk round the park and find a good spot to read my kindle. After all why waste a beautiful day? I found a lake with benches and sat down to read but before long I spotted a turtle swimming towards me. In Australia turtle spotting was a bit of a hobby so I was delighted to see that he was not alone. Though my SLR was low on power I had my small camera. It was at the bottom of my bag as I hadn’t planned to use it and I thought it was just typical when my everything in my bag practically fell out but before I could get annoyed I noticed my spare battery! The day was back on track.

I spent the next few hours taking hundreds of shots using as many different setting as possible. As well as the multitude of turtles there were swans and other birds as well as of course the beautiful garden scenery. The weather held for most of the day but when the clouds started looking ominous I put away my SLR and headed for Orchard Street to check out the shops beyond my budget knowing that I wouldn’t be tempted.....Or so I thought. Before the expensive shops started I stopped by a more reasonably priced cafe for some cake and iced chocolate as my treat for the day. 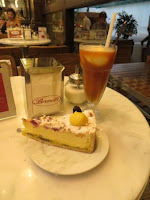 As I walked past all the designer shops I realised that shopping could easily be a full time job here but I resisted until I was past the expensive shops. As I headed back into normal people territory I spotted a small camera shop where I thought I might venture in to purchase a tripod as I really wanted to get some decent night shots of the river and surrounding buildings. I found a cheap and compact tripod easily enough but before I could escape the sales lady was showing me a new lens. I am poor and I have no room I told her, but it is half price and small she insisted. Obviously I gave in and left even poorer but excited at having a new toy to play with.

I kept walking until I reached one of the shopping centres near the harbour where I found a cheap department store that had a perfect new rucksack. It had many pockets and would be far more convenient than my trusty one pouch bag that had lasted for more than two years of travelling and days trips. My camera, new tripod and lens fitted perfectly in the main pouch with room to spare for future lens purchases perhaps? The multiple pockets meant that as long as I could remember which pock held what I should be able to find my iPod, phone and purse ore easily on future day trips.

All that spending wore me out so instead of heading back to the harbour I returned to the hostel and editing my photographs from my brothers wedding. With some judicious cropping and an edit here and there I had more good shots than I had previously thought. Feeling rather please with myself I headed to bed looking forward to seeing what the next day would bring.
Posted by Lyn at 12:54 No comments: Links to this post

Though I only had a limited time in Singapore I was happy to take the days as they came. I loved not having to get up and not making any plans. The hostel provided a breakfast of toast and fruit until the middle of the afternoon so there was no hurry for me to get up and nowhere I needed to be.

My main impression of Singapore was that it’s a great place to visit if you want to shop. Everywhere I went there were shops and stalls and shopping centres. Even though I wasn’t too interested in shopping I was glad of the respite they provided from the high humidity of the city not to mention that where there are shops there is usually cake!

My first day in the city I started with a quick visit to china town but since I wasn’t looking to shop I had soon seen all I wanted to. I walked through the city until I reached the harbour where I enjoyed my first cake experience and used to free wifi to see what there was to do in the city other than shop. I discovered I was not far from the ArtScience museum, as a lover or both art and science I knew I had to visit. The building was an interesting shape which reminded me slightly of an American baseball glove. I later discovered that it was designed to look like an opening water lily and was a great feat of architecture, oops. 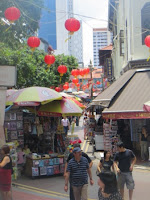 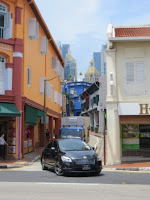 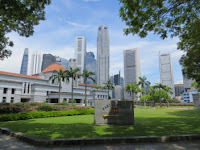 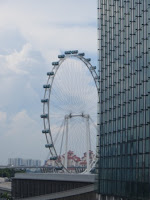 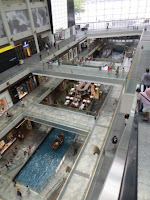 Inside I discovered there were two paid exhibitions and one floor that was free. Usually I’m all for the free but one of the exhibitions was for lego art and the other was an Egyptian mummy exhibit. I am interested in ancient Egypt but would have given it a miss as I have seen quite a few exhibits in the last three years. Fortunately I couldn’t resist the lego art exhibition and it wasn’t that much more expensive to go to them both so I though what the hell and bought my tickets.

I started with the mummies and was glad I had decided to give it a chance. Before the exhibit we were shown a short 3D film which was surprisingly rather good. The exhibit was well spaced out with the information on the exhibits interesting without being too overwhelming. They even had a room set up to explain the mummification process and I especially enjoyed finding out about the mummy who was mummified with a bowl on his head. The experts think that the bowl used to collect excess fluids was accidently left in place and got stuck over night. There are marls that showed attempts had been made to remove it indicating it was not meant to be there. I do hope the poor people who left it there were never found out as am sure their punishment would have been very harsh. I still find it creepy to think there are dead people inside all those and ages but I like seeing the everyday artefacts and learning about such a different culture.

The real highlight of my day was the lego art exhibit. I found myself looking at the and thinking that anyone could have done what the artist had done but that only he had the vision to see it. Though I’m not sure most people would have the patience as some of the pieces took him months to complete. As well as enjoying the art I found myself agreeing with his descriptions of his pieces and his inspiration. He too once had a proper job and gave it up to follow a love of something very different. I was amazed at his vision and the things he managed to portray with multicoulred bricks and nothing else. 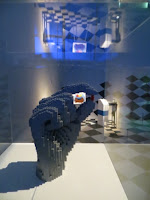 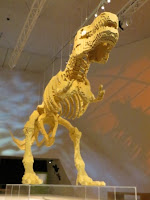 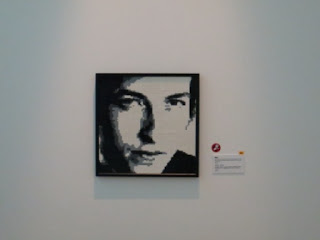 After taking many photographs and placing Zack in various stupid places I decided it was time to head back to the hostel. Though I was happy to take it easy I thought that maybe I would try get up a little earlier the next day but my good intentions were foiled by the beautiful night skyline. I did my best to capture it with my small camera but soon realised I would have to return with my SLR another night. 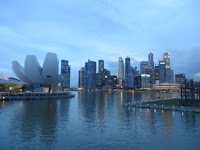 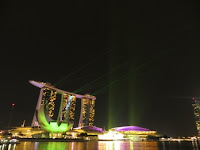 Once back at the hostel it was time to start going through the many wedding photos to see if I had managed to get many decent shots. I was pleasantly surprised to find quite a few good ones but frustrated at how my lack of experience had messed up some including the first dance. Also I soon realised I had failed to get any of the groom with his parents. I that was one shot I the professional photographer had got so I knew they’d have some but I wished I had managed to get a few during the reception as well.
Posted by Lyn at 08:30 1 comment: Links to this post