I woke up at 5am feeling refreshed and raring to go. I got ready and headed to 7-11 for breakfast again as it was right next to the dive school I was using that day (called Roctopus!) and not much else was open. In typical Thai style I arrive late but they were running later. This time the ride to our boat was much shorter and more sedate than the previous days as we didn’t have to cross the island this time. Both companies tended to dive on opposite sides of the island which was one of the reasons I chose them.

On the way out to our site the sea was quite choppy which made for an interesting journey. I had never been out in such conditions and wondered how it would affect our dive but the people taking us out knew their stuff. They took us to a site called Green Rock and told us we would swim around it. Our guide showed us a picture of the site as well as pointing out which fish we might see. There were only three of us going out with her so she designated herself my buddy as the other two were there travelling together. Once in the sea I enjoyed floating on the waves before we started our descent  and was amazed at how good the visibility was below the surface. It wasn’t sunny-day-good but considering the surface conditions we could see a surprising amount of life. There were many different fish which I still don’t know the names. Once we surfaced our guide helped us identify some of them but were just too many for me to ask her about them all!  The main surprise for me though was how much of the previous days final dive had sunk in. I knew that it would take time for me to get better at controlling my buoyancy and after yesterday I fully expected it to take a lot of time but I think in my sleep I must have processed a lot. I was still far from perfect but I felt I finally understood how to use my breathing to control my rise and fall. It may not sound like much but for me it was a big deal. I probably missed a few fish whilst testing this new skill but since even a banner fish amuses me I still saw plenty to make the dive worthwhile. I did have a slight issue with my buoyancy during our safety stop but an extra weight from our guide soon sorted out that problem. The highlight for me though was the small school of little remoras who decided to come and investigate me. I wanted to keep them but as we swam off they elected to stay behind. Understandable but sad as they were extremely cute! 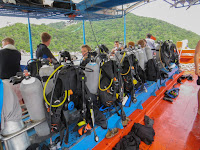 Our second dive was near a sunken WW2 ship. We were told that if the thermocline was too high we would give it a miss and explore the pinnacles nearby. We descended in much calmer water this time and started to swim. Our guide once again pointed out anything she thought would interest us including a trigger fish which we stopped to look at. Though my mask was not fogging up as much as it had the day before it was still clouding up during the dives and I foolishly decided that this would be a good time to clear it so I could see better. I had mastered the art of not kicking whilst I did this so I no longer floated up however as previously mentioned I still had away to go and this time the tip of my fin touched the bottom just as cleared my mask. The fish thankfully didn’t move but I turned and saw the instructor wave me over. It turned out there was one behind me and it didn’t like me messing up its territory! Of course then fish one decided it would have a go too, I only saw one so I have to take the guides word for this. I am happy to report I remembered the advice from the previous day and kicked my fins to attract it (them?) to those instead of me and swan directly away from their territory. Phew, fish attach averted! I did my best attempt at an underwater apology and was very careful the rest of the dive. 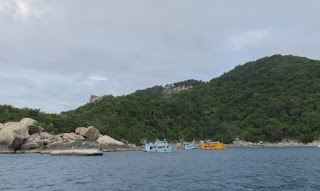 After a short swim  I was excited to see the wreck looming out of the thermocline. The thermocline was just above the bottom of the wreck so there was still plenty for us to see plus I got to experience my first thermocline! It was unsurprisingly very cold but even having been told about it I was still surprised at how quickly the visibility deteriorated in the cold water. There wasn’t any coral on the wreck yet but there were plenty of fish and it was nicely bizarre to see a ship underwater. The gun turrets once used for mass death were now home to little fish who looked like they were enjoying playing hide and seek through the various hidey holes. After the wreck we saw some more coral and marine life and a blue spotted ray! Years on and I still love them and am seriously considering one as tattoo number three....  This time I managed to ascend with no buoyancy problems. The difference a day makes. I was as much in love with diving as I had ever been, possibly even more.

We headed back to the shop and our guide was quick to find me and help me fill out my log book. She was a genuinely lovely person and it was real pleasure to dive with her so I was a sad when she announced I’d have a different guide for my afternoon dives. She introduced us and he turned out to be English and unsurprisingly as friendly and nice as everyone else I met at that place. I do wonder if they give them all happy pills there. Turned out I had just enough time to go to 7-11 for lunch then  it was back to the shop where I got to have a lie down because once again I was in the last taxi. I was also introduced to my new dive buddy who turned out to be English too. I will admit it was nice to converse with people who are fluent in sarcasm for a change.

We were on the same boat I had been out in that morning but this time it was a lot fuller, I guess on an island know for partying as much as diving the afternoon dives are a lot more popular! We piled on and were soon on our way back out to sea. I took the chance to practice my meditation breathing as I had read it could help improve my diving.. Once we arrived at the sight we were to be first off the boat so we headed straight to the bottom deck for our briefing. It was time to dive 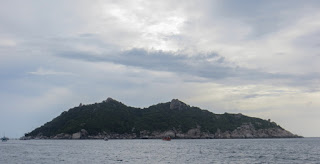 My new ‘buddy’ hadn’t been diving in a while so was doing a quick refresher. I was a bit concerned about this as I thought it would cut in to my dive time but as said previously, these guys know there stuff. Visibility was good so whilst my ‘buddy’ and our guide did the refresher I went for a swim about. I kept them in sight and checked in regularly. There were again a lot of fish it was interesting to swim about and good to take my time and great practice at going slow and really looking. Since they were having a review I decided to do one of my own. I attempted a Buddha pose only to open my eyes and realise I was floating up, sigh. I hadn’t gone too far so I stayed calm and concentrated and soon I was descending once again. I did take the time to signal I was ok to our guide who was probably a bit confused as to what to was doing up there. He totally gets points for noticing though. Whilst I was disappoint that I had ascended I was proud of my lack of panicking and my cool reaction which allowed me to fix of the situation quickly.

Soon enough we went off exploring. We swam over some coral then we hit sand, sand and more sand. I never thought sand was that interesting but I lowered myself down and close up I saw fish popping in and out of their hidey holes, an almost transparent crab and what looked to be mini banner fish with babies! Tiny tiny fish that were ever so cute!! To top the dive off I found myself hovering quite by accident. I stayed calm and waited to see if I could hold it. I could! So I crossed my legs and attempted a mask clear and I managed it without noticeably ascending or descending. I cannot tell you how impressed I was with myself, as the saying goes simple things... Too soon we had to ascend to the surface.

Though eight dives in two days was a lot my only regret was that the following day instead of going on a dive boat I would be getting on a ferry and heading back to Bangkok.