My first task in Cambodia was to book a tuk tuk to take me round the temples. The hostel had a whiteboard where guests could write their name beside a time and which circuit they would like to do. This meant the guests could share the tuk tuks and split the cost. Most people leave early in the morning so by the time I got round to writing my name there was only one other person in the hostel interested in going. At first I was concerned as she seemed quite young but I soon learned she was not much younger than me. Another consequence of my late start was rising temperature but since we were later than most there were less people about, a trade off I was more than happy about.

We started at the famous Angkor Wat which was still busy with tourists even later in the morning. I soon discovered my new friend and I were of a like mind when it came to viewing temples. It was impressively large and a little overwhelming so we hired one of the guides to explain some of what we were seeing. It was worth it as he was quite amusing though as always most of what he told us I have already forgotten. My fellow backpacker and I decided to visit the top shrine. I had my trusty scarf but for once I was told that wasn’t enough. Fortunately my new friends top was declared appropriate and so she kindly lent me her raincoat so that my shoulders were also appropriately covered and we were good to go. The queue went down quickly and soon we were at the top of the temple where I felt the views were more impressive than the shrine itself. Still it was a good end to our first temple visit and we were ready for the next one. Though we agreed, no more guides!

After Ankgor Wat we visited three more temples; Angkor Tom, Ta Phrom and Banteay Kdie. Each one was different and had its own charm. None of the temples had anything like the amount of restoration work as Angkor Wat yet at Angkor Tom the structure was still very impressively. Much of the surroundings had been cleared and it was easy to imagine how it would have looked in its prime as we wandered through the ancient walkways. Ta Phrom was different from the Angkors in that we walked around the structures not through them. Also it was much more overgrown than the previous temples making it almost seem like part of the forest. I was most impressed with the large tree growing over the temple with routes surrounding ones of its entrances. Only later that evening was I educated about the more recent history of Ta Phrom. Ta Phrom was none other than one of the main temples used in the Tomb Raider films amd the tree was quite famous, oops. Had I arrived earlier the night before I probably would have learnt this sooner as I discovered that the hostel played the film most nights.

Finally we visited Banteay Kdie, a temple surrounded by the rubble of its outer structures. Here there was much more rubble than Angkor Tom but we could still walk the ancient halls in a similar way. It was like Ta Phrom in that the surrounding forest was much more in evidence. Unlike either Angkor Tom and Ta Phrom Banteay Kdie contained a worshiping woman at a colourful shrine showing that, as I had heard, these really were still places of worship and reverence despite the various states of disrepair they were all in. 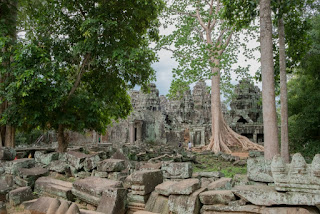 For me the later temples were far more interesting than the busy Angkor Wat. I enjoyed the sense of peacefulness now present but also the sight of nature reclaiming what had once been both great and vast structures. Some people might be unsettled by the reminder of how fleeting and fragile our civilisations can be but I never am. I like ruins and reclaimed ruins I think might be my new favourite landscape.

We arrived back in the city late in the afternoon. Though our later departure time had indeed meant quieter temples for the most part the heat was very energy draining. Therefore my new friend and I parted ways for a rest arranging to meet up for dinner later that evening. We quickly realised that the cheaper restaurants were away from our centrally located hostel. We didn’t have to go too far though before we saw a couple of places down a side street. One of them had local dishes at good prices and I got my first taste of traditional Cambodian food.

After the spiciness of Thai food I had become used to (though not accustomed to!) the lack of spice was a refreshing change. I soon discovered that despite this there was still plenty of flavour in the traditional dishes. I honestly cannot remember in what order I ate what dishes but I do remember enjoying every single one of them immensely. After dinner we explored the night markets where we declined many tuk tuk rides and massages and a lot of street food. The food looked good but personally I was too full and slightly overwhelmed by the size of the market. I settled on buying some banana chips for the following day before happily heading back to the hostel. Our day of temples had been so pleasant that my friend and I had decided to visit the smaller temples the next day. This time though we would be amongst the many people starting their day at sunrise and Angkor Wat so off to bed we went.