Playing Tourist Whilst Looking for Work

On of the nice things about the YHA is that there are hair straighters in the bathrooms so that I was able to make myself look decent and employable whilst I was looking for work. This turned out to be important as though I thought I was highly employable apparently the employers in Wellington didn’t quite agree with me. In hindsight I had two things against me. The first was that for the first time I had my photo on my CV. I got the idea from a friend of mine in OZ and whilst it worked for her in my case it wasn’t really me and therefore I think it just looked awkward. The second was a stupid but vital mistake, I managed to get my own phone number wrong. Yes it was a brand new number but it's a slightly important detail. Sadly I didn't realise until I had handed my CV into my top six places I'd like to work. I went back just in case but I know that if I was in their place that mistake would make me think twice about employing them, especially as I am now aware of how many CV's these places receive in a day.

Not deterred by my lack of success I signed up with a temp agency (using my new correct phone number CV) that were happy to put me on their books and promised one or two shifts a week due to my experience. Seriously, who knew that being able to carry 3 plates would be so useful?!?! Whilst looking for work was a top priority there is only so much a person can do in a day and I was in a brand new country and I had managed to make a brand new friend so the next thing on my agenda was some exploring!

My friend was from the Netherlands and had come to Wellington to spend some time with one of their girl’s rugby team. When she was training or playing I was job hunting and when she had time off we explored together. At her instigation we visited Somes Island, Zealandia and the Weta Cave. She also came along when I met up with a backpacking friend I'd met in OZ who was passing through. She's an outdoors person so we met at the botanical gardens and enjoyed some fine Wellington weather, something of a rarity at this point in the season.

Whilst winter may not be the ideal time to visit Wellington it actually had its moments. In my first couple of weeks I missed Cairns and the tropical weather dreadfully. I missed the sea and the reef and the hostel and my friends and almost every part of the life I had managed to make there. However slowly and insidiously Wellington worked its magic on me. 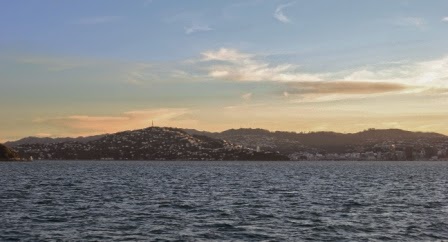 Early on my friend suggested a trip to Somes Island which is a scientific and historic reserve. We bought some food at the now obvious supermarket and set off on the ferry on a bright sunny windy day. Yup, even when it's fine in Wellington the wind still blows. Despite the wind the ferry ride was fun. My friend was laid back and adventurous. She threw herself into being a tourist and her enthusiasm was catching. We took photos of our windblown trip over to the island and once there I was glad we'd braved it. The island was less windy than the city and simply beautiful. As well as being fun my friend was also happy to stand and take in the scenery whilst I took photo after photo with my recently neglected SLR. It's a rare treat to be able to go somewhere with a friend who isn't into photography yet be able to indulge in my 101 snaps of the same thing habit without driving them up the wall. It was then that I think I started to fall a little bit in love with Wellington. Sadly though we saw many birds, which we took dozens of photos, of we didn't get so see any penguins as the last boat left before they returned to the island. Still it was a good day and made me realise that Wellington was a very different place with its own charms. 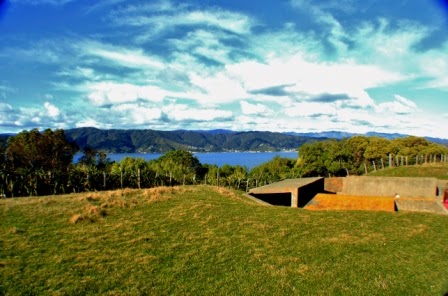 Another day we took a bus out to the suburb Miramar. There isn’t much out there but there is the Weta cave. It’s basically a shop but they have on display some of the props used in the films they do the special effects for, most notably The Lord of the Rings films. I was happy to geek out and enjoyed the little film they showed which told the story of how they went from a small special effects studio working on NZ TV to become one of the world’s best go-to special effect firms. I was stunned to see the sheer number of well know films they had worked on before and after the LOTR trilogy. Since my friend wasn’t as much of a geek as me and I was trying to save money we decided against touring the studio but it was still an interesting visit and it was fun to be doing these things with someone for a change. Whilst not Cairns I was beginning to understand why so many of my friends had suggested I start my New Zealand adventure there. 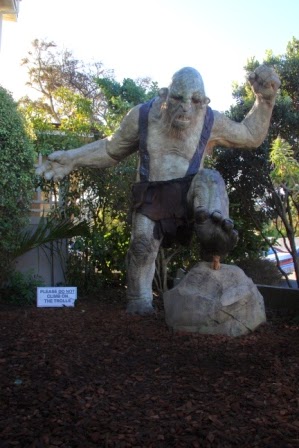 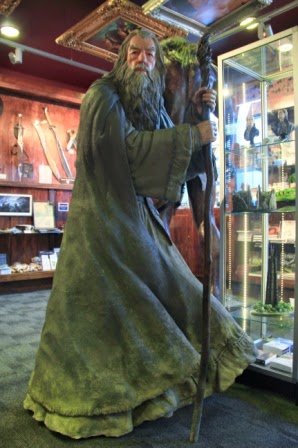 Posted by Lyn at 02:48 No comments: Links to this post