The End of my Australian Adventure

Leaving Cairns was hard but I was excited to be back in my favourite Australian city, Melbourne. Sadly I was so excited I managed to leave my laptop on the plane. I was staying with the same family friend who had kindly out me up on my previous visit and realised within moments of arriving what I had done. I called the airline straight way with my flight and seating details but they said that nothing had been found. I even knew exactly where I had left it. Being the cheapest of the cheap flights the seats lacked any storage so I had placed the laptop down the side of my chair for landing. The airline were completely disinterested and unhelpful and despite returning to the airport and numerous phone calls it was soon clear that the laptop was long gone. I was gutted. I had travelled all over Australia with my old beat up laptop coming to no harm yet the second trip with my new one and it was gone due to a moments carelessness.

Fortunately as upsetting as this was I had much to cheer me up over the next few days. Not only were my hist extremely kind and friendly I managed to catch up with an old friend from my PhD days. She had recently mover to Melbourne to take up a university research position. I thought it would be strange ot see someone from my past life in the setting of my new life but as soon as we met up it felt completely normal. In fact we  got on so well that she invited me out to the university to see her research and cooked for me on my second last day in Australia. I was fascinated by her research and I must admit it did make me miss my lab and the days of being a research student. In fact I even considered looking into the optic scene in New Zealand, though what I thought I'd find there as a working holiday tourist I have no idea.

I also visited one of my favourite places in Australia: the National Gallery of Victoria. Way back in 2010 I rediscovered a love of art and it was on ethe the constants thorughot my time in Australia. Every city I went to I visited the galleries and this was my favourite. As well as being somewhere to get lost i for hours they have a brilliant tea room, it's a winning combination. However there was something else to tempt me there this time. My hosts had told me about the current exhibition: Monets' Garden. Painting fromt eh start of his career all the way through to the end when his eyesight was failing him. I paid extra for the audio commentary and spent hours walking back and fourth amongst his masterpieces.I am constantly fascinated by artists ability to create such amazing scenes when I can barely draw a stick figure and Monet, well he was brilliant. I know nothing of art and techniques but his work kept drawing me back and the story of his life and the evolution of his garden was something I had never thought could be so interesting. NGV once again you made my visit to Melbourne extra special, brilliant, just brilliant. 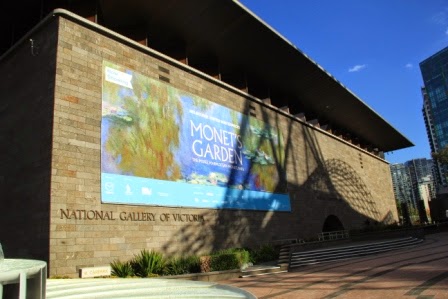 My old uni friend wasn’t the only old friend I caught up with though the others were slightly newer old friends. During my ‘holiday’ I managed to have lunch with a friend I’d met on my one tour I did whilst in Broome and also the girl I’d met in Cairns just a few months earlier. It turned out that she too was on her way to New Zealand though whilst I had decided to head straight for the middle she was going to Auckland. As we were both on working holiday visa’s we figured we’d bith be moving around and decided to stay in touch so when we did end up in the same town we could catch up once more. In this new life of mine making friends and saying goodbye happens all the time. I’ve been fortunate that I have actually managed to meet up with a fair few friends due to coincidence or planning but it’s still hard to say goodbye to the ones you really click with. Therefore the idea of meeting up with a friend I’d made in Australia whilst travelling New Zealand definitely appealed. 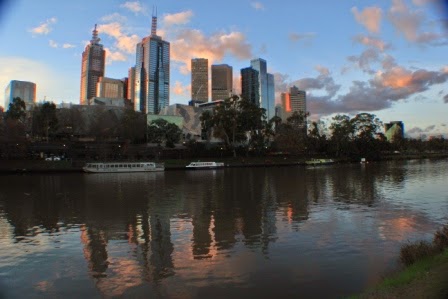 My final act in Australia was to go shopping. I headed to one of the largest electrical stores and bought myself a new laptop. I bought the same make and model and vowed to myself to take better care of this one. The financial pain was somewhat lessened by the fact the laptop was on sale and as I was flying out that day I was able to reclaim the tax at the airport.


And finally there I was leaving Australia with no return date in mind, just a vague intention to return to see the bits I missed sometime in the not too distant future. I checked in, went through security, insisted they give me a leaving stamp and boarded my flight. Soon we were taking off with the pilot announcing that though Wellington airport wasn’t open yet it should be by the time we got there. Oh yes, I headed for my new life in Wellington, New Zealand the day of the biggest storm for over a decade. An so ended my Australian adventures....... for now.