One of the hardest things about travelling is that I usually miss everyone birthday. Even when I manage to be in the right country the chances of me being in the right state never mind town are slim. Therefore I was determined to make it to my friends 21st this year. I knew the chances of spending any other birthday with her are slim but this one was possible. Not only was I in the right country I was flying out from her home city of Sydney. Therefore my last weekend in Australia was spent in the suburbs at my friends home with her family.

Getting there turned out to be a mini adventure in itself. The railways were working on the lines so instead of a simple train ride I ended up getting multiple buses in an attempt to arrive at a specific time which I failed to do due to traffic making the buses late and missing a connection. It was a bit awkward with all my bags but thankfully my friend came and rescued me at the final stages of my journey and on seeing her it was all worth it.

On arriving at her home I discovered that there are some advantages to being the eldest as this ensured me my own room and saved me from camping on the floor. I would have been happy on the floor but post party at 1:30am when some people were still going I was thankful to be able to wander off to a bed and get some much needed rest. The party itself was fabulous. My friends parents had organised a hoe-down theme and most people turned up dressed accordingly. I borrowed some boots and spent the night pilfering random peoples hats, well I am a backpacker.  The best part of the night for me was my friends surprised guests who are mutual friends and whom I also had not seen in a really long time. It was so good to catch up with them as well as some of my friends other friend who I had met on previous visits.

The day after the party was my friends actual birthday and when I finally woke up she was opening some presents then it was time for breakfast cooked of course on the barbecue  After the excitement of the last few days I was a little relieved that the day ended up being very chilled and relaxed with both of us even fitting in an afternoon nap. 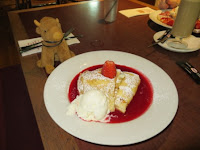 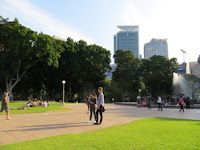 My second stint in Australia was almost over but I had one last full day and we spent it with a mutual friend in Sydney where we had a pancake brunch followed by some random window shopping including a stop at the Pandora store so my friend could buy a new bracelet especially for all her 21st charms. Our other friend and I were both new to Pandora and had a great time admiring the detail in the animal charms by friend had been given. Too quickly it was time for the birthday girl to head back home. Our other friend and I took a walk to china town for some very tasty mini cream filled doughnut things which I had somehow missed in my many previous visits then it was time for her to head home too leaving me to head to my hostel for my last night in Sydney.
I had booked in to the same hostel I stayed in when I first arrived so though I didn’t recognise anyone I knew my way around. I considered heading out but it was cold and grey and I had the rest of the TV series I had downloaded in Cairns to watch. I stayed up as late as I could to get a head start on my jetlag and set my alarm for as late as possible. The other reason I chose to stay there is their late checkout time I had my bed until 11am but I still needed to get up and shower and repack the little I had unpacked for my overnight stay.

As I waited in the hostel common area I overheard some backpacker discussing farm work and visas so I went over and butted in giving them the advice given to me when I first arrived. It was so strange to think that I had finally got to the stage where I was the one going home. I remember feeling sorry for people like me when I first arrived. Of course I knew that I’d be going back. I had my return ticket booked and multiple plans to keep me in Cairns whilst I waited for a spot on a boat. Even knowing that on my return my stay would be short didn’t make me sad. I have my New Zealand visa and a whole new adventure waiting for me there. I love Australia and I will miss it and be sad when I leave it the next time but there is a whole big world out there and I’ve only touched upon the amazing opportunities it has to offer.
Posted by Lyn at 04:50