Cairns Ending as it Started

Though my last day at work had been long and hard it hadn’t been a bad day and in reality it was like many other Sundays before which was why I always had Monday off. Therefore on my first day on my return to being a backpacker I didn’t feel like one. I got up at 6am and did what I had done on many days off before. I put on sunscreen, packed my bag and headed out to wait for my ride to a boat. The reef was calling and I was finally answering. I was finishing my time in Cairns as I had started it, diving!

Any remaining grumpiness from the previous day and early start soon dissipated with the spectacular views as the bus made its way along the beautiful coast road to Port Douglas.  Once there the marina was our first stop and I was soon in my element once more barefoot on a boat heading away from land. The boat was Poseidon and the food and crew were great however I did find it awful crowded which was odd because whilst there were more people than there had been on the sail boats I had been on it was also a much bigger boat with more space per person. I think I’m just a small boat person, which considering my dislike of large groups isn’t actually that surprising. One advantage f a new big boat is it’s speed. Poseidon got us to our first location in record time and we barely had time for the usually safety talk, form filling and dive briefing before we were suiting up and preparing to get in to the water. I did have one scary moment where my temporary card was questioned. My actual card was sent to the UK but my temporary card was only valid for 90 days. When I went out on Poseidon it had been almost three month and I was still within the 90 days however the crew were unsure about accepting it as there is no photo to prove it is me. Thankfully because I had learned in Cairns they were familiar with the company I learnt with and a few questions satisfied them that I was one of the many who came for a visit and ended up staying.

As with previous trips I found myself getting nervous as we approached the first dive site. It had been over a month since I had last been out and I had completed less than 20 dives. I was still a newbie! What if I forgot everything? Of course I didn’t and the crew ere obviously used to this as they reassured me that as soon as I was in the water I’d forget all that and of course they were right. As soon as I was in the waster my worries started to fade as the wonder f the reef took over. There were some nerves as we descended but our guide kept and eye on us and soon my confidence returned as I discovered that I did indeed remember how to dive. Despite the length of time between dives I felt that even my first dive that day was an improvement on my previous ones. The site was beautiful and I was soon snapping away with my underwater camera which I had thankfully remembered to borrow from the hostel the previous night despite the busy evening. Too soon it was time to leave the water and as we emerged I experienced and unfamiliar feeling, I was cold! I secured my tank and removed the first stage as quickly as possible so my air could be refilled then headed straight to the deck for some sunshine. Imagine my delight on discovering there were muffins and biscuits up there too! As many of us enjoyed the sunshine one of the crew appeared with some laminated enlarged photos and started telling us about the reef and the creatures who call it home, sadly before she was done it was time to gear up again. My disappointment at missing her talk was short lived though as the excitement of seeing the reef surfaced again. Getting all the gear on is never fun, the tanks are heavy, the fins are awkward to walk in and half the time I forget to unhook my tank thus anchoring myself to the deck but it’s always worth it the minute I’m in the water. 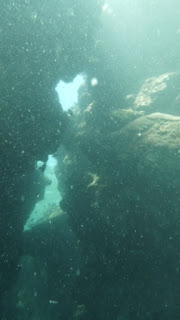 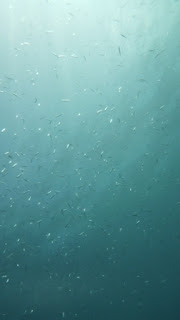 On our second dive our guide took us through a short tunnel system which was the highlight of this dive for sure. I had never been underwater and not able to see the surface and predictably I loved it, which is good news as I want to learn wreck diving as soon as I can. I managed most of it just fine only hitting my head once and mostly managing to avoid any surfaces. I even managed to stay close to the ocean floor without landing on it! After our second dive it was time for a fabulous buffet lunch before we moved on to our third and final location. I tried to ignore the fact that it would also be my final dive for sometime but it was on my mind as we geared up. 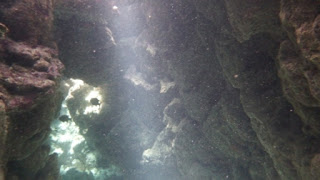 We didn’t venture far from the boat this time and I did feel that we were more crowed on this dive than the others. We were three groups of six divers including our guides and usually we ventured in different directions this time though we didn;t venture too far from the boat. This was obviously their playground fro their tricks. They fed fish scraps so that the fish swam close around and in between us. Then later the photographer coaxed a tame larger fish out of hiding to be stroked by us so they could take our photos. I would have disliked this last dive except for the part in between these events. We were right at the continental shelf in between the first and second fish ‘show’we saws our second reef shark for the day and the biggest ray I have yet to encounter. I also saw and managed top photograph  a couple of smaller rays who were obviously disturbed by our presence as they both got up and replicated themselves slightly before settling back on to the sand.

All together it was a fabulous day out and a great end to my time in Cairns and the tropics. The crew were fabulous and the food was great and the locations were as beautiful as I have come to expect. IN fact this worried me. I mentioned to my manager on my return that visibility hadn’t been so great, it had only been about 10m whereas on other days I had been lucky enough to experience 20m. I think that once I start diving elsewhere I am going to have to seriously re-adjust my definition f ‘good’ visibility. Before I get that far though I hope to dive the reef in the winter when I have heard the visibility can be even better than I have so far experienced, now that will be something worth seeing.
Posted by Lyn at 14:29