Every time I visit Sydney my perspective is different. When I first arrived it was my first impression of Australia. It was where I settled in to life as a backpacker the start of what turned out to be a year of adventure. Now it is the place I come to see friends and have a rest.

After leaving Cairns life was nonstop. I arrived in Sydney at 11:00 and was straight on to the train to my hostel. Though they were still cleaning the room when I arrived they were happy for me to go straight up and claim a bed and locker. The housekeeper was a lovely Argentinean lady who was happy to chat as she sorted out the other beds. I stayed out of her way and was straight online to find out the location of the Canon repair centre and how to get there so I could collect my camera which I had sent them over two months ago. A quick chat with the hostel staff and I was on my way to the nearest internet cafe to print the form necessary for sending said camera on to Hong Kong where hopefully it will be repair or replaced in time for my brother wedding, though I am not holding my breath. By 17:00 my camera was collected, boxed with form and on its way and it was time for me to get ready to head in to the city to meet up with some old friends.

I had arranged to have dinner with some friends I met when I first arrived. It was great to see them again and hear what they had been up to. One I had seen at New Years but the other I hadn’t seen in a year so there was plenty to talk about. After my busy day and lack of sleep and food I thought I would be tired but a few bottles of wine and I seemed quite happy to keep going. It turned in to those of those night where we talked absolute rubbish and I announced that I loved everyone I met and my friends most of all of course. It was a good night but I was disappointed in myself as I am still trying to limit my alcohol intake. On reflection though 4 hours sleep, no food and starting on the wine was maybe not the best way to go about that. I can;t say I regret it too much though as I did have fun and though I lost my camera it was returned to me the next day, all be it with a few extra photos on it. 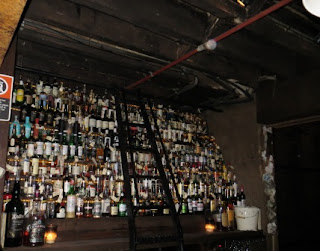 The next day I had arranged to have dinner with a friend but she had to cancel as she was unwell which left me with a whole day to myself. This turned out ot be a good thing as my young German friend/co-worker/roommate from Cairns was still in town and it meant we could spend the day together. We visited the art gallery and I showed off my favourite paintings and introduced her to the wonders of scones with clotted cream and jam. Then we had an afternoon nap and met up in time to see the sunset at darling harbour and the clock striking the hour at the Queen Victoria building. She also agreed to save me some embarrassment by offering to collect my camera from the bar I had left it in the previous night. It was great to catch up and talk in the way we used to when we were both up north but we were both tired and she had an early start the next day so we parted early and headed back to our respective hostels. As early as it was I headed straight to the shower then bed as the next day I would be heading out of the city to the suburbs to visit my closest Australian friend not just to catch up but to help her celebrate her 21st birthday. 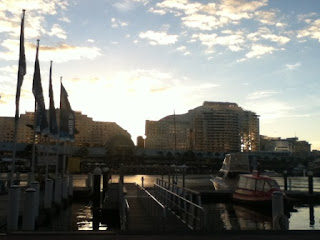