The Dr Who Experience

I’ve always fancied visiting Wales and since a good friend of mine was currently living there it seemed a shame no to take advantage. Of course I would decide to visit her as the college term was coming to an end with many assignment and exams looming but since I would only be in the UK for a limited time (organised around a certain persons wedding) there weren't too many options for when I could visit. It was great to see her and she did give me a range of options for exploring Swansea and the surrounding area as well as offering the use of her bike. I did walk in to the centre most days and visit a fabulous little cafe for their delicious hot chocolate and cakes but mostly I watched Dr Who. I love Dr Who and only started watching it when it returned to our screen with the 9th Dr so I was delighted to revisit it by watching her box set from the beginning. It made me a little sad as it was Jonathan who insisted we watch them since he remembered the originals. Of course I was hooked right away so we then had to watch them all. Anyway, it’s a great show and I was happy to wrap myself up n a blanket and watch them only occasionally disturbed by the cat meowing at me as if her food bowl wasn't completely full or doing something incredibly cute.

Despite her heavy college load my friend spent her evenings entertaining me. One night we took a trip to a nearby beach which thought really windy was apparently not as windy as it could be and the views were spectacular. I know I've said it before but I really wish I had my SLR as I am sure I could have managed to take a few decent shots, well with that and a tripod to help battle the wind! The bracing walk was followed by a pub meal in a great little pub that had a surprisingly extensive specials board and made a properly decent burger and chips which I did douse in vinegar and made me feel quite at home. 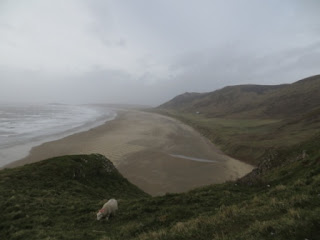 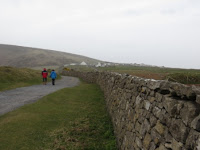 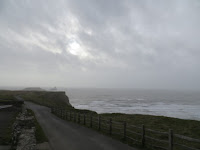 On the Saturday we had a fairly early start and took the train to Cardiff for yet another attempt at finding a dress but first...... First we went to the Bay area and the Dr Who Experience. It was awesome and fabulous and so very geektastic. The walk through at the start was well thought out with references to many of the 11th Doctors adventures and enemies which finished with one of my better 3-D experiences. Then we spent a fair while looking round the exhibits at the old costumes and the evolution of some of the more well known enemies. I think I read every plaque and more than ever I’d like to see the original series. The true highlight was one of the staff taking my two stuffed companions and placing them on the TARDIS for me to take their photo. When she asked if I’d like her to do that I could only answer that she had no idea how much I would like it, I really am such a geek. 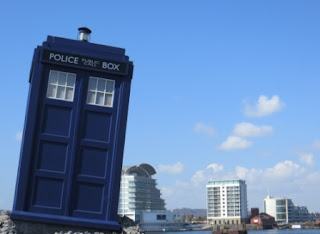 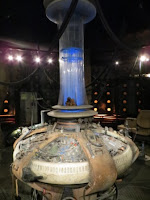 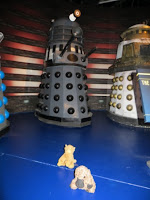 Finally I had read and photographed all I could and it was on to the shop where I swear if you could think of it they had a Dr Who version of it. I was tempted in to buying some 50th anniversary commemorative stamps thus probably moving from geek to nerd and my friend bought me a present of a Dr Who note book and pencil which will definitely be coming on my next set of travels with me.

Before tackling the dress shops we took advantage of the beautiful day to have lunch outside Cardiff castle where the food and rest left me almost ready to face the shops once more. Of course by now it was easier as I had a better idea of what would and wouldn't suit me though we still managed to gather quite a collection as we headed for the fitting rooms. Thankfully after only a few dresses we found the one. I didn't even bother trying on the rest as I knew I had found what I had been looking for.  Though technically my friend found it and a great but too expensive pair of shoes. Dress finally conquered we spent the rest of the afternoon window shopping before settling in a pub for a well deserved glass of wine as we discussed our dinner options. We eventually decided on Wagamama’s and were not disappointed though we declined desert in favour of the mini muffins back home. Once home we were greeted by an accusing cat, as if she hadn’t been asleep upstairs all day, she’s a gorgeous cat but she wasn’t fooling anyone. 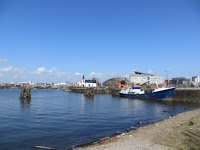 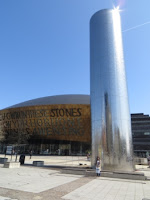 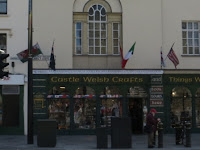 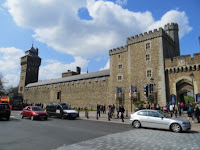 Before long I was back in my usual place on my friends sofa with wine and cake which felt like a very fitting end to a chilled but too short visit. As much as I would have loved a longer visit I had a gig to go to the next day and she had a house to renovate and a job to work on not to mention a college course to get on with. Makes me tired just thinking about it! It’s a good thing I’m on holiday and I must make to most of it as during my visit I got an e-mail from a boat I’d like to volunteer on saying to keep in touch as they might have space round about the time I’m due back. It’s exciting but if they do as amazing as it would be I am sure I shall earn every dive.
Posted by Lyn at 21:36